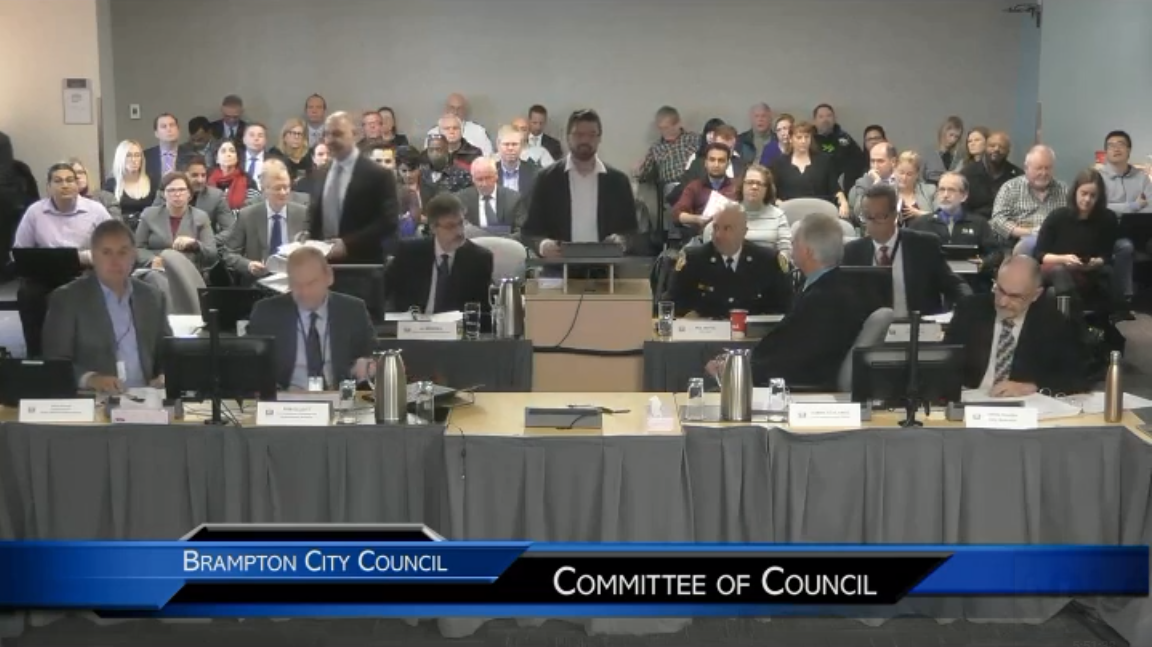 In December 2018, Kevin delegated to Brampton Council to talk about The Bikeport and bicycles as an equitable transport choice in Brampton.

On December 5, 2018, Kevin Montgomery delegated to Brampton Committee of Council to talk about The Bikeport and bicycles as an equitable transport choice in the City of Brampton.

It was a long one: 11 hours! The video below is advanced to where Kevin’s delegation begins and is followed by questions from the Committee of Council.

Below the video is a transcript of Kevin’s delegation.

First, I want to open by saying “congratulations” to everybody here. It was a very exciting election and every one of you have well earned your place here, so, well done all of you.

A little bit about me — I haven’t really had a chance to introduce myself to everyone here. I started The Bikeport a few years ago primarily with the goal to enable people to discover how to integrate using bicycles in their everyday lives. As for myself, I’ve been a Brampton resident all my life, but I’ve been car-free — that is free of car ownership — since 2011. I’m a Certified User Experience Designer and also a Registered CAN-BIKE Instructor. What that allows me to do apart from giving cycling instruction is that I pay particular attention to things like the data accumulation and feedback, and consider how to improve the user experience of using a bicycle, for everyone.

Throughout the election, there were some common election themes that came up. Missing from this list (in the slide deck) that was discussed recently, of course, is “economic development”. But we heard things like Crime and community safety concerns. We heard issues regarding congestion and road safety, health and healthcare and of course, taxes, car insurance and generally things affecting our home budget and our bottom lines.

Further, with a change in the political landscape, there might be some challenges on the horizon about how do we get funding for larger capital projects in the City of Brampton. So, we need to consider: How do we better use the resources that are available to us.

But, what if I said, there is a cost-effective way to address all of these issues?

With that in mind, I want to introduce the idea of Bicycles As Transport. This is a theme that I’ve been starting to build up a little bit over this year. The idea being: To use bicycles to enable people to connect to their communities.

Resolving congestion: You can fit a lot more people on bicycles in the same space as a car. You can get as much as 4-5x more throughput in the same lane-width as a car with people using bicycles.

Improvements to mental and physical health to perhaps reduce some of the burden on our medical services in the City of Brampton. Of course, we know about the issues ongoing through there.

And of course, unless one chooses to take out a separate claim [sic] (policy), there’s no insurance, no gas costs. There’s a far better return on investment for your home budget and of course, for the use of taxes in the City of Brampton.

And, bicycles can be useful transport tools. As you can see here (in the slide), here are some examples. I’ve owned a few cargo bikes now. Here are some pictures of what I get to experience on a day-to-day basis when people are out there using their bicycles. There’s a lot of opportunities. I think there’s definitely an untapped market for supporting using bicycles as transportation.

Ultimately, I think my ask of Council is to challenge yourselves to broaden your scope of how bicycles can be used in the City of Brampton. To think bigger than recreation, but to think of transportation equity in the sense of any conversation that involves parking or addressing traffic concerns. These are also opportunities to make strides toward equitable solutions of other transportation modes and bicycles in particular.

Everyone should be able to get from anywhere, to anywhere, on a bicycle in the City of Brampton, safely and comfortably — or even more so — as taking a car.

CAN-BIKE lessons are on hold until further notice due to the COVID-19 outbreak. Subscribe to be notified when bicycle training lessons are available! Dismiss